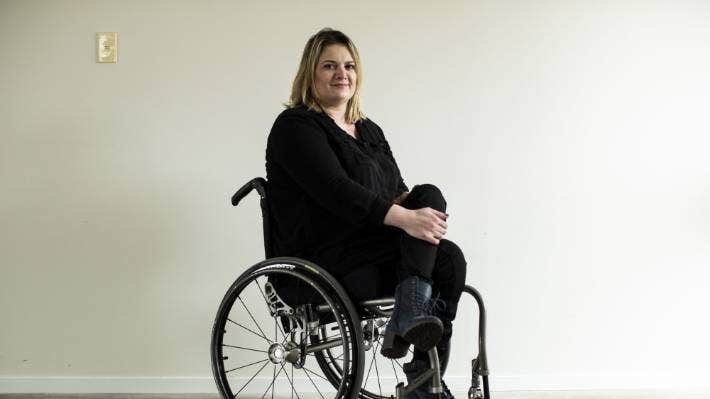 A disability advocate is frustrated there is no commitment from Government to create enforceable legislation that would improve the lives of those living with a disability.

Article by Olivia Shivas, published in Stuff 7 July 2022 at www.stuff.co.nz/pou-tiaki/129186800/government-wont-enforce-accessibility-despite-promising-legislation-to-make-nz-more-accessible

Disability advocate and Access Matters campaigner Juliana Carvalho said unless accessibility legislation was enforceable, people who require access will continue to live in substandard conditions. [Access Matters] is a group of disability organisations who proposed Accessibility Act in Aotearoa.

A principle within the proposed act asks that it be enforceable and that it includes an office where people with disabilities can lodge complaints if they encounter obstacles which are in violation of the act.

“In 50 years’ time, we will still have the same situation with people like me having to shower on the porch. It’s horrible and undignified,” Carvalho said.

In 2021, the Government promised to introduce the Accessibility for New Zealanders Bill when it announced the launch of the new Ministry of Disabled People.

At the time of the announcement, former Disability Issues Minister Carmel Sepuloni said that the voices of the disability community would be embedded at all levels of decision-making, including the development of accessibility legislation.

The legislation is being drafted and is due to be introduced to Parliament later this month.

A Cabinet paper released in October by Sepuloni stated that a “prescriptive approach” to accessibility legislation was considered, but was “detailed and complex” and required significant time, funding and resources to develop.

Juliana Carvalho is frustrated there is no commitment from Government to creating accessibility legislation that “will have real effect”.

The paper also considered a non-legislative approach to improve accessibility.

That approach, would be quicker to set up and easier to amend, but could not be enforced and would not be considered real change by the disability community.

Instead, the Government chose another option, “enabling legislation” according to the papers, because it balanced the need to heighten awareness of accessibility issues and could also be flexible and adaptable.

Neither Sepuloni or the new Minister for Disability Issues Poto Williams would commit to accessibility legislation that was enforceable.

Sepuloni said last week that the accessibility legislation pushes for progress to be made.

“It is not a piece of legislation that puts all of the standards and enforceability in place in itself … It is what enables it to happen in lots of different areas.”

“I think while the [Access Matters] were clear about the legislation that had come from overseas, around the standards and around the implementation of that, my view is that there are other ways to actually achieve the same thing, which don't perhaps put so much tension and restriction on those who we are seeing to implement the changes,” she said.

“This is really about ensuring that our disabled people feel that they have a voice and whatever issues and whatever barriers stand in their way, and not just through transport and housing, but through all aspects of life. I think this legislation actually speaks to that much more fully.”

Minister for Disability Issues Poto Williams said the accessibility legislation the government is proposing will encourage people “to do the right thing”.

However, in the Building Act 2004 there are no requirements for residential properties to have mobility access.

In response to whether the building code should be updated, Sepuloni said she didn’t want to “step on the toes or another minister” but admitted that progress needed to be made in a range of different areas.

Williams stood by what the Government was proposing, saying it would encourage people to do the right thing.

“Being positive and proactive about this is the way we embed and empower people to do it better,” Williams said.

With the launch of Whaikaha – Ministry of Disabled People last week, the Government also announced it would introduce an Accessibility Governance Board to ensure disabled people were at the decision-making table.

The board would be led by disabled people, and bring in the technical expertise of government policy and business; the board would complement the work Government is doing to improve accessibility.

However, Carvalho didn’t think the Accessibility Governance Board would have the independence or power to make decisions.

“Even if we get this right, right now, and if it’s the way the Access Matters campaign are asking, even if we do it right now and make it enforceable, it will take many years for New Zealand to become truly accessible,” she said.

An independent assessment paper by Auckland Disability Law found that although there were issues around how robust the legislation was, it was a step towards greater accessibility.

“Because the framework only allows for recommendations to decision makers, there is essentially nothing to enforce.

“It is questionable whether the proposed legislation is likely to meet the expectations of disabled people.”

The paper also stated that the powers of the governance board were limited and the framework lacked regulatory mechanism.

“There is also no power of investigation, dispute resolution function and enforcement pathway.”

Carvalho said if the Government do commit to following the 13 principles outlined by [Access Matters] people with access needs would finally have the same rights as everyone else in this country.

Access Matters has invited disabled people to share stories about the barriers they face. Those stories will be submitted to a select committee when the Accessibility for New Zealanders Bill is presented to Parliament.

Article by Olivia Shivas, published in Stuff 7 July 2022 at www.stuff.co.nz/pou-tiaki/129186800/government-wont-enforce-accessibility-despite-promising-legislation-to-make-nz-more-accessible

Photo of Juliana by Chris McKeen at Stuff.