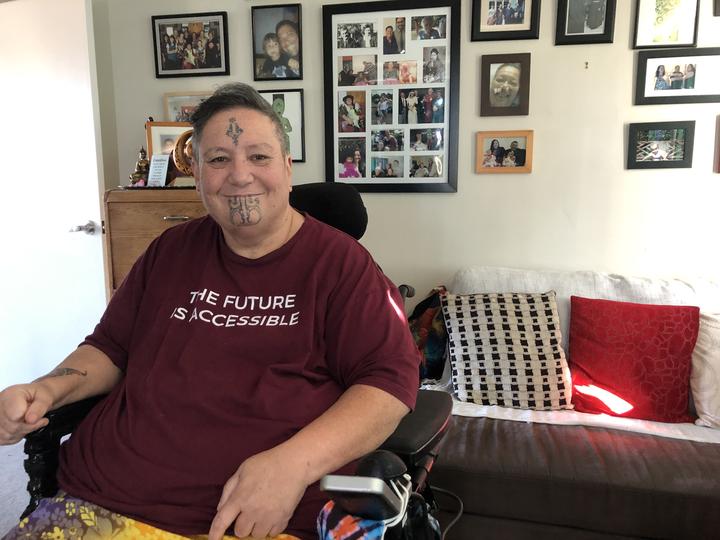 When Dr Huhana Hickey needs to go to the hospital for treatment, she heads off in her wheelchair across the neighbouring park, along the footpath a few blocks and she's there in 10 minutes ... But if she needs to get there, urgently, at night the park is now impossible to get through because a new gate is locked at night, blocking her path.

When Dr Huhana Hickey needs to go to the hospital for treatment, she heads off in her wheelchair across the neighbouring park, along the footpath a few blocks and she's there in 10 minutes.

Hickey calls herself a "frequent flier" at the hospital. She has multiple sclerosis and her condition is deteriorating.

Wheeling to the hospital is faster than calling an ambulance and there's no way a taxi will pick her up for a $2 fare.

But if she needs to get there, urgently, at night the park is now impossible to get through because a new gate is locked at night, blocking her path.

"There's no access for a wheelchair to get under it, to get over it, get around it or get through it," she says.

Today The Detail talks to Hickey, a lawyer and longtime advocate for people with disabilities about the everyday barriers for one in four New Zealanders - she says a higher percentage of Māori are disabled.

It is estimated that thousands of people with disabilities are living in unsuitable accommodation but only 2 percent of houses are accessible in Aotearoa.

Kāinga Ora plans to make 15 percent of new houses accessible and there is growing pressure for more.

It's not only housing, new plans for carless city centres block out people who struggle to walk or cycle.

A proposal to make Wellington's Golden Mile car-free has been criticised for excluding a large part of the population, while the head of a recreation group has highlighted the barriers to the country's great walks for disabled people.

"We're not accommodating the needs of disabled in any plans, in the unitary plans, in the designs, in the infrastructure. We need to be part of all those debates, we need to be in every area of every board, trust, service that exists within society if we're going to be fully included."

Hickey takes The Detail's Sharon Brettkelly through the park which includes a community garden and playground, both inaccessible for her. She has to wheel along the roadway used by cars because there is no separate path, navigate speed humps and when she gets to the footpath on the other side there are more hurdles.

Dr Hu as she likes to be called - she's a big fan of the TV series - was the first disabled public housing tenant to sit on the board of Housing New Zealand before it became Kāinga Ora. She has been advocating for disabled people for more than 40 years but she is frustrated with the slow pace of change.

"I'm over it. You get one victory and then next minute they put another barrier up in another area," she says.

Hickey explains that disability was not a concept that Māori understood until colonisation.

"We included whānau regardless of whether they were physically disabled, intellectually disabled, neuro diverse. All those things were not labels we had."

People need to deal with the discomfort with something different to the mainstream and learn how to be "inclusive of difference".