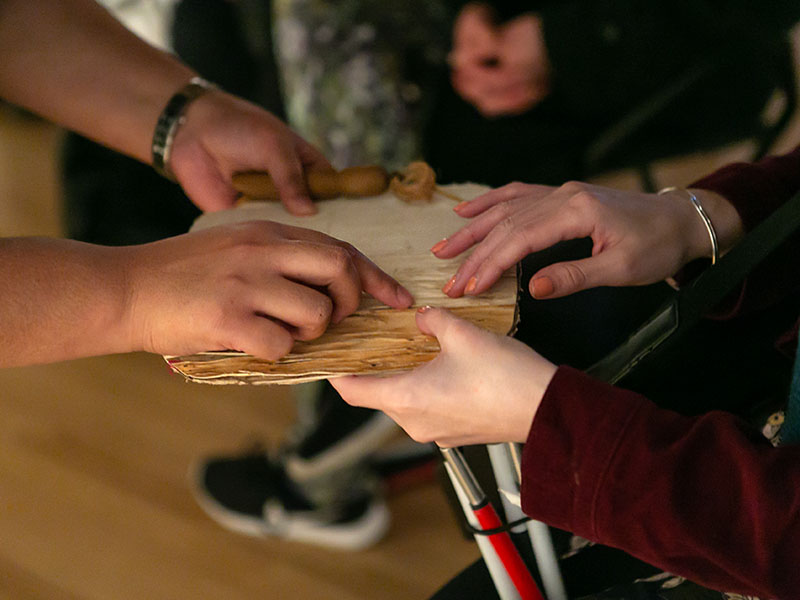 Earlier this year my niece and I went to Wellington to see the World of WearableArt exhibition at Te Papa. I have low vision but reasoned that this exhibition would be one I could enjoy - and indeed, I did - as we had booked one of the very informative guided tours of the exhibition.

The real highlight, though ...

... was the audio described tour of Te Papa we had booked for Sunday morning. It was a 90-minute tour beginning at 9:30am, half an hour before official opening time, so we had some time before the influx of other visitors. Our guide was Judith Jones, a very accomplished audio describer, and we enjoyed a most interesting and comprehensive tour of the permanent exhibits and several temporary installations. There is a charge for these tours, but it’s money well spent. My niece is fully sighted but enjoyed the tour as much as I did; indeed we spent much of the rest of the day revisiting the exhibits for a closer look.

This experience was in stark contrast to what happened when my friend Sue and I visited Te Papa several years ago. We had travelled to Wellington for the AGM and Biennial Conference of NZ VIEW and, having a couple of hours to fill, decided to see what Te Papa had to offer. Unable to see any obvious signage in the foyer we approached a staff member who was lounging casually by the stairs. We explained that we had impaired vision (I was using my white cane so there should have been no doubt) and asked if she could recommend an exhibit for us. She mentioned something on an upper floor and when we enquired where the lifts were we received the all-too-familiar response, a vague wave of the arm and “over there” — just great when you can’t see much!

Eventually we found an extensive display of paintings that looked as if they should be interesting, but another staff member nearby, who appeared to be engrossed in cutting up pieces of paper, was disinclined to explain how we could find information. As I discovered this year when my niece and I visited, there are consoles with touch screens that give access to a wealth of interesting information about these historic paintings. I think Sue and I would have been able to use these screens at least to some extent if only the staff member had put down his scissors for a few moments to help us.

I realise these two experiences are not strictly comparable, given that Te Papa had no warning that two vision-impaired visitors were going to turn up on that Friday afternoon, but we were disappointed at the apparent lack of any inclination to assist us. Somehow we thought Te Papa might have done better, and thank goodness they now have!